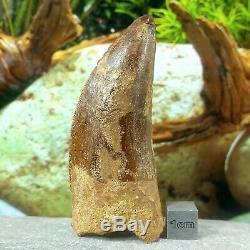 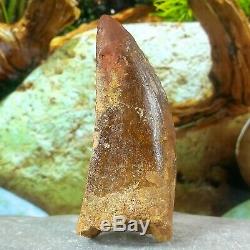 All of our Fossils are. 100% Genuine Specimens & come with a Certificate of Authenticity. Location Found: South of Taouz, Kem-Kem basin, Morocco. Which means Jagged/Sharp Teeth Lizard , is derived from the shark genus Carcharodon, though the Carcharodontosaurus. Were land roaming animals thought to be as big, if not bigger, than the T-Rex!

These beasts were carnivores with enormous jaws and long, serrated teeth which could grow up to eight inches long! These serrated teeth were situated in the mouth in such a way that when attacking prey they would leave an enormous open wound in the victim, causing heavy blood loss, and allowing shock to quickly set in, leaving the animal weak and extremely vulnerable for the attacker to make its kill.

These predators existed between 100 and 94 million years ago. The items image shows the EXACT SPECIMEN you will receive. We also keep a record of every image we upload. The word Fossil used to be defined as something dug up.

Now-a-days it generally means The remains or trace evidence of prehistoric life. The study of fossils is called palaeontology; someone who collects and studies them is called a palaeontologists. Fossils can be as tiny as a grain of pollen or a seed for e. Or as huge as a limb bone from a giant dinosaur.

For animal or plant remains to have become fossilised , they must go through a certain process that preserves them for up to millions of years after they have died. Usually it is only the hard parts of plants and animals that survive this long process.

The most common method of how fossils formed is once an animal or plant dies it falls to the ground, then is covered by sediment. This is often sediments brought from water. In the diagram above, the Ammonite died in a river, and sediments over time covered the ammonite (shown in the second diagram). Finally after hundreds of thousands, or millions of years, the land is eroded and the fossil can be seen. Of the vast amount of prehistoric life that died, it is only a tiny amount that has survived the fossilisation process.

The conditions when the majority of life died were just not right at that time to preserve them. Most fossils are found in sedimentary rocks which were formed from the sediments of rivers, lakes and seas. The majority of the animal and plant fossils we find today had originally died near these areas, got broken up and deposited on the beds of the rivers, lakes and seas. The sediments covered them and over time some of the layers grew so thick that many of them got crushed.

The sediments compacted and over time and turned to rock. The rocks shifted, moved and became exposed to the elements. This process can take up to several hundred million years. Now as the rocks erode or are quarried for example, the fossils become exposed and can be collected. The Best conditions for Fossilisation. The quick burial of animal remains in moist sediments. This prevents scavengers from eating and bacteria from decaying them. The quick burial in volcanic ash. Many dinosaur bones in the American west have been found buried in volcanic ash. The presence of hard body or plant parts, teeth, bones, shell and wood for example. Ground water that is heavily mineralised. Sediments that are very fine make a better burial than coarser gravels. Calm conditions, so that remains are not broken up (by wave or currant action for example).

The item "T-Rex Type Tooth Fossil Carcharodontosaurus Dinosaur FSE002 100% Genuine" is in sale since Wednesday, November 20, 2019. This item is in the category "Collectables\Rocks, Fossils & Minerals\Fossils\Dinosaurs & Reptiles". The seller is "ukge-silvergeo" and is located in Southwold.