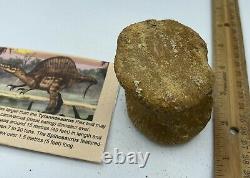 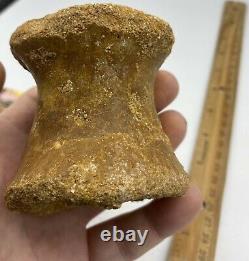 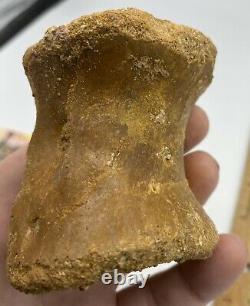 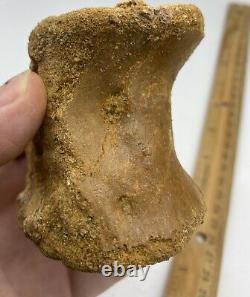 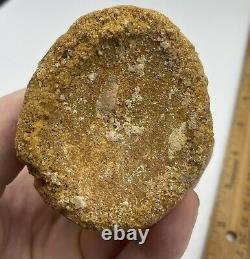 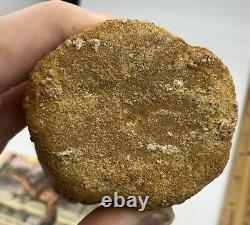 Fossil Spinosaurus vertebra found in Kem Kem Beds, Morocco. This was a monster dinosaur that was larger than T-Rex.

In great condition with no repairs. Length 2 1/2 width 2 1/2" height 2 1/4". Spinosaurus (meaning "spine lizard") is a genus of theropod dinosaur that lived in what now is North Africa, during the lower Albian to lower Cenomanian stages of the Cretaceous period, about 112 to 97 million years ago. Spinosaurus was among the largest of all known carnivorous dinosaurs, possibly larger than Tyrannosaurus and Giganotosaurus. Estimates published in 2005, 2007, and 2008 suggested that it was between 12.6-18 metres (41-59 ft) in length and 7 to 20.9 tonnes (7.7 to 23.0 short tons) in weight.

A new estimate published in 2014 and based on a more complete specimen, supported the earlier research, finding that Spinosaurus could reach lengths greater than 15 m (49 ft). The skull of Spinosauruswas long and narrow, similar to that of a modern crocodilian. Spinosaurus is known to have eaten fish, and most scientists believe that it hunted both terrestrial and aquatic prey; evidence suggests that it lived both on land and in water as a modern crocodilian does. The distinctive spines of Spinosaurus, which were long extensions of thevertebrae, grew to at least 1.65 meters (5.4 ft) long and were likely to have had skin connecting them, forming a sail-like structure, although some authors have suggested that the spines were covered in fat and formed a hump.

Multiple functions have been put forward for this structure, including thermoregulation and display. The Kem Kem Beds also referred to by various names including the Continental Red Beds and Continental intercalaire is a geological formation along the border between Morocco and Algeria in southeastern Morocco, whose strata date back to the Late Cretaceous. Dinosaur remains are among the fossils that have been recovered from the formation. Recent fossil evidence in the form of isolated large abelisaurid bones and comparisons with other similarly aged deposits elsewhere in Africa indicates that the fauna of the Kem Kem Beds (specifically in regards to the numerous predatory theropod dinosaurs) may have been mixed together due to the harsh and changing geology of the region when in reality they would likely have preferred separate habitats and likely would be separated by millions of years. This item is in the category "Collectibles\Rocks, Fossils & Minerals\Fossils\Vertebrates\Amphibian, Reptile & Dinosaur".

The seller is "markitagainfossils" and is located in this country: US. This item can be shipped worldwide.