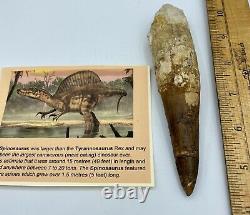 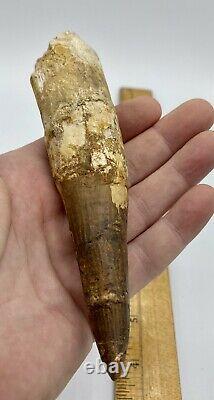 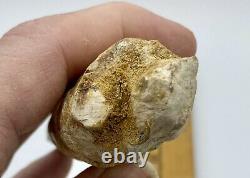 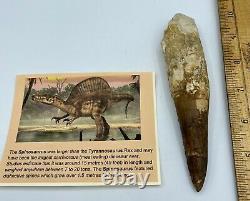 Fossil Spinosaurus 5 3/4 x 1 1/2 Tooth found in Kem Kem Beds, Morocco. This was a monster dinosaur that was larger than T-Rex. This tooth is in good condition with no repairs. Spinosaurus (meaning "spine lizard") is a genus of theropod dinosaur that lived in what now is North Africa, during the lower Albian to lower Cenomanian stages of the Cretaceous period, about 112 to 97 million years ago. Spinosaurus was among the largest of all known carnivorous dinosaurs, possibly larger than Tyrannosaurus and Giganotosaurus.

Dinosaur remains are among the fossils that have been recovered from the formation. Recent fossil evidence in the form of isolated large abelisaurid bones and comparisons with other similarly aged deposits elsewhere in Africa indicates that the fauna of the Kem Kem Beds (specifically in regards to the numerous predatory theropod dinosaurs) may have been mixed together due to the harsh and changing geology of the region when in reality they would likely have preferred separate habitats and likely would be separated by millions of years. Listing and template services provided by inkFrog. The item "Spinosaurus 5 3/4 Huge Tooth Dinosaur Fossil before T Rex Cretaceous S208" is in sale since Wednesday, January 13, 2021. This item is in the category "Collectibles\Rocks, Fossils & Minerals\Fossils\Vertebrates\Amphibian, Reptile & Dinosaur".