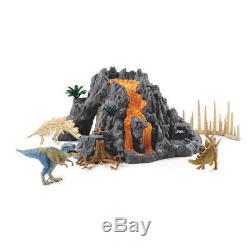 The giant volcano is erupting! A channel of hot lava is flowing into the valley, threatening to submerge the plants and animals. In addition to the huge volcano with numerous functions, the set contains a T-Rex, a Stegosaurus and lots of accessories.

The earth trembles from the force of the volcanic eruption, and the prehistoric animals run away as fast as they can. But then the big T-Rex appears too. Can you catch it and lock it in the stalagmite cave under the volcano?

On your adventure, you will also find a fossil that was dislodged from the side of the volcano by a rockfall and broke into lots of puzzle pieces. The giant volcano also includes lots of other exciting animals like reptiles and amphibians as well as a dinosaur trap, a water hole with removable water surface and points to insert plants. Fun fact Very many volcanoes were active during the Cretaceous period. They hurled ashes into the air and spat out hot lava at temperatures ranging between 800 to 1,200 degrees.

Dimensions: 56 x 16 x 37.5cm (W x D x H). More about the Schleich Dinosaur Collection. The Schleich Dinosaur collection will surely take you on a trip to the land before time! The complete production process for Schleich figurines, from the design of the models to the finished product, takes an average of three to four months. Many different stages must be completed each involving loving attention to detail and the highest quality standards before the famous hand-painted and uniquely realistic Schleich figurines are finished and ready to be played with by children around the world.

Materials: Each Schleich figurine has its own base colour, the recipe for which is uniquely developed using various PVC-based pigment mixes of varying degrees of hardness. All production substances and materials used undergo chemical checks in advance. Hand Painting: Every Schleich figurine is hand painted.

The only exception occurs in the case of large patterns for example the brown patches on a giraffe which are applied via a pad printing process. Otherwise, the careful, step-by-step process of hand painting each figurine with sponges, brushes and airbrushes is a great display of painstaking craftsmanship. In order to keep the colour of each figurine identical across all production runs, each tone has its own individual recipe that stipulates the pigment proportion of up to nine base colours and is mixed in-house. Mixing its own colours not only helps Schleich ensure consistency between all its tones, but also means it can guarantee that the paints it uses are safe. The colours undergo strict quality inspections both during purchasing and after the painting process in the form of light, heat, abrasion and chemical tests.

Only once they have passed these tests the finished figurines receive the famous Schleich flag with the red S and are ready to be dispatched. The item "Schleich Dinosaurs Giant Volcano With T-Rex 42305 Authentic New" is in sale since Thursday, November 29, 2018. This item is in the category "Collectables\Animals". The seller is "pepperfieldsau" and is located in Smeaton Grange, NSW. This item can be shipped to Australia, United States, Canada, New Zealand.