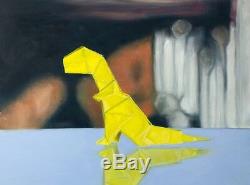 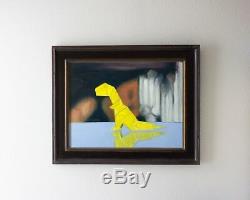 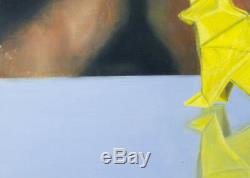 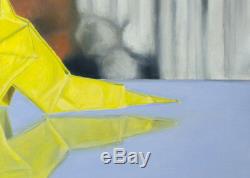 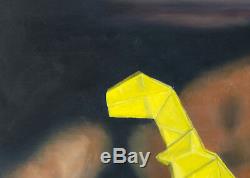 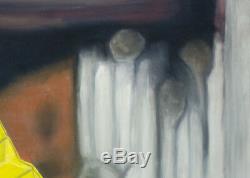 "Origami T-Rex", Oil 18x24 inches. Ue to the attention and care that I put into each oil painting. My artwork is primed to last multiple generations if properly cared for. I spend hours meticulously creating something unique, using only the highest quality paints and materials, such as Holbein brand paints and Richeson brand boards.

After completion, each oil painting is finished with a UV protective removable. Varnish, which was developed by the. As an innovative solution to preserving paintings.

A certificate of authenticity is included with every original painting. All paintings arrive ready to hang. I dont see painting as a career choice or as something that I could quit doing. I tried other majors, like civil engineering, but I never stopped painting during my hiatuses.

Id go crazy if I wasnt in the middle of painting something. Im always working on a study or preparing something for a show. I think Id be painting regardless of who or what for. Photography eventually became a coping mechanism, a way for me to fight my social anxiety.

I used to hide behind my camera. This way I would have a purpose for being somewhere because I was doing something productive.

If anyone asked what my rates were I would politely tell them that I would gladly work for beer. My Saturday night bar hopping adventures usually involved me taking photos of beer glasses and pool tables, candid shots of locals. Nearly every social situation involved me taking pictures of the oddest things and people. People used to ask me what I do with all my photographs; to an outsider, the concept of taking photos non-stop seemed sort of weird and looking back it definitely was.

Sometimes I would tell the truth I mostly just delete them. I do not have the disk space to save hundreds of photos.

At the start of my photographic experience, I would only take a decent photograph by accident, so deleting them became second nature. Other times I would sarcastically tell people that I build a shrine out of them. Questions from strangers about why I took hundreds of photos of useless things were redundant. I didnt take photos for some purpose, like shrine building or an art project.

I took photos as a way to provide me with a purpose when I went outside, like a pseudo-volunteer-job. My therapist said that this was called a. Simultaneously, I was never truly included in these social interactions.

My photographic process became a way to study the real world. I never saw myself as a photographer, but as a scientist taking notes. I couldnt even go to a concert without my camera. After a few years of event photography, I became a skilled photographer.

I formally renounced and dropped out of college, and then I renounced (and quit) my day job. I was quite the elitist. I believed that art should be created without the use of modern technology. I tried very hard not to work from photographs.

That was until I met Tom. Tom was a 70-year-old figurative oil painter who lived in the studio across the street from mine. He was in the exact same school of thought. Our favorite subject was figure painting. The thing is, Tom had been studying art his whole life, and he was only kinda good to put it modestly.

I remember one conversation, Tom had told me that many of the successful figurative oil painters living today worked from photographs in combination with live models (these people are called hyper-realists), and that many of them use giant computer screens so that they can zoom into any photo and see the details, or change the contrast, or mess with the colors and Tom made it clear that he was against this method. I remember something that my dad told me when we went to a museum and I made fun of a painting for using tape to paint perfect lines. He said to me using tape or not using tape doesnt really matter, what matters is the final painting.

Out of the fear that I would one day end up like Tom studying an artform my whole life and never mastering it I decided that it was time to start working with innovation instead of against it. This put me in a good position because I had trained for years as an atelier method painter, keeping my photography and painting separate. So when I started experimenting with painting in combination with my photography, this was the first major breakthrough in my process. The second breakthrough was Toms advice on the various uses of different whites and complimentary colors. Such as the using ivory white for the highlights on a face and using misty blue for the lights in the darker areas on a face, and then using flake white for all the middle tones.

What I love about reality is that you dont have to imagine the ridiculous, it already exists. Often I use a photo as a starting point.

I do live sketches of the subject, experiment with color schemes and compositions. I think that its important to study the subject in order to understand the subject. Many of my paintings are not staged at all, in a definitive moment kind of fashion. For example, a few of my portraits are of people that Id only met while photographing an event, like the painting titled Zombie Crawl. While others, like the painting titled Maya G.

Involved a makeup artist, a rented wardrobe, and a location. Im a Bolivian-American oil painter who was born in Denver on June 16, 1990. My father named me Cedric so I would not be burdened with picking a pseudonym. Those who know me best describe me as a sparkling cunning artist with a penchant for gummy bears.

I graduated with a Bachelors Degree in Fine Art in 2016 from Metropolitan State University of Denver , where I learned a lot about art history and art theory. I learned the most about painting through my various apprenticeships and private lessons with master painters such as Felicia Forte, who thought me through online lessons via Skype. Im one of the youngest members of the International Guild of Realism. A meta-modern guild whose global mission since its founding is to recognize the best realists working today.

I also own a rescued greyhound named Coco whom I might put up for adoption if she pisses in my car again. Museum quality Plein-aire 3.5 Wide closed corner frames are beautifully and meticulously hand-finished and leafed by expert craftsmen. The detailed process to create this frame is a trade secret passed down for generations, and each frame is as individual as the art! Add 7 to the dimensions of the painting to get the total size of the framed painting.

D-rings and a 30lb wire are attached to the back (ready to hang). Hand-leafed and finished on the frame. 3-1/2 Wide and 1-1/8 Deep. All paintings are carefully packaged inside custom packaging. A portion of all proceeds is donated to help retired Greyhounds find new homes.

This item is in the category "Art\Paintings". The seller is "cedric_chambers" and is located in Littleton, Colorado.