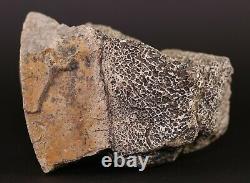 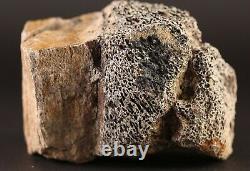 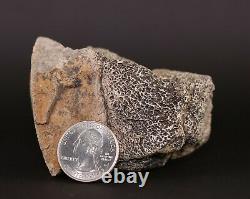 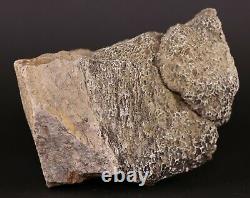 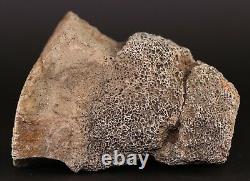 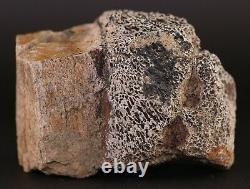 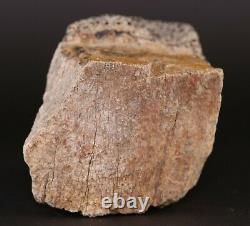 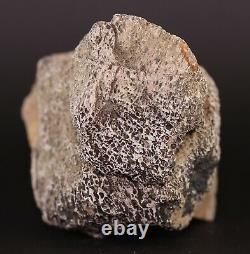 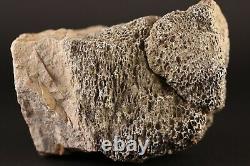 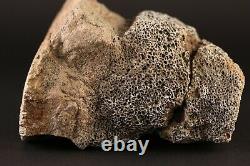 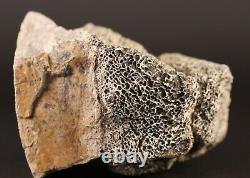 A Certificate of Authenticity from us at Pioneer Fossils will accompany this item. This is not "like" a T Rex or "African T Rex". Nor is it just a cousin in the Tyrannosaur family like Albertosaurus or Daspletosaurus.

It is the real thing. Here is an extremely nice section of leg bone, most likely a femur, from a T Rex. Was found in the Hell Creek Formation, near Newell, Butte County, South Dakota, about 20 miles north of Sturgis.

There were a large number of pieces (more than 120). Found in the same exact site, of a T-Rex. To make a complete skeleton. All the pieces are from the same back leg, so they are mostly femur, fibula and tibia of the T Rex.

The specimen measures about 2.7 inches from bottom to top. The bone is thick about an inch, with marrow and trabecular pattern above it. It weighs 6.6 oz.

Three pieces were next to each other in the ground. Rather than try and pull them out individually, proper steps were followed and they were bonded together while still in the dirt. It appears to have been 2 pieces of marrow and one of bone. They fit together nearly perfectly. This is not considered a defect with dinosaur bones, but is standard procedure.

If pieces like this were not glued together where you could see them together in the ground, if you excavated them all individually, you would have a pile of hundreds or thousands of pieces with no clue as to what pieces fit into what. 66 to 68 million years ago. The last great Age of the Dinosaur. Tyrannosaurus Rex was king of the predators in the Hell Creek Formation. The name Tyrannosaurus means "Tyrant Lizard" in Greek, and Rex means "King" in Latin. It could grow to 40 feet, and had the strongest bite of any land animal ever.

We invite you to visit our store, which can be accessed on the right side of the top page. Once inside our store, you will see about a thousand items for sale, and we hope you will love them. We sell items ranging from budget. If you like what we have to offer, PLEASE favorite us! It is the easiest way for you to look us up in the future.

You will receive the exact item described and photographed, unless clearly stated otherwise. In some cases, that is easy, in some cases, not as much. We are happy to enclose a COA (Certificate of Authenticity). Some words of caution about COA's: Do not let them become a substitute for learning about the specimens.

We have been working with fossils and minerals for many years, and we have seen hundreds of very nice-looking COA's, some that are wrong, mis-describing a specimen. Finally, a COA, without a photo of the exact specimen on the COA itself. Is worthless, as it can later be placed next to any other fossil or mineral.

We suggest that in addition to relying on a COA, that people read and study the subject. We want to make sure you are fairly treated by us. If you take it out of the United States, you are on your own. This item is in the category "Collectibles\Rocks, Fossils & Minerals\Fossils\Vertebrates\Amphibian, Reptile & Dinosaur".