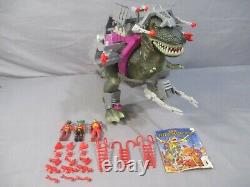 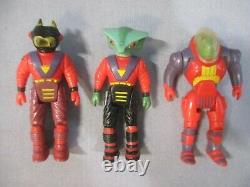 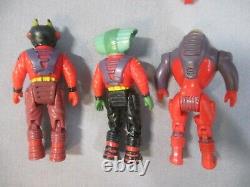 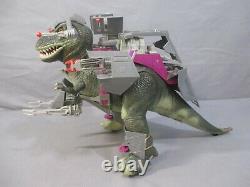 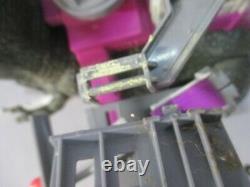 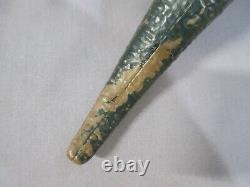 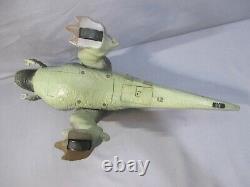 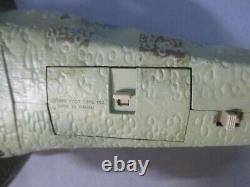 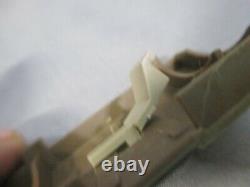 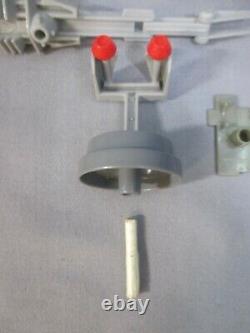 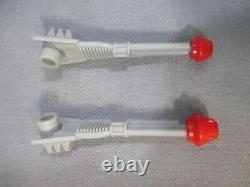 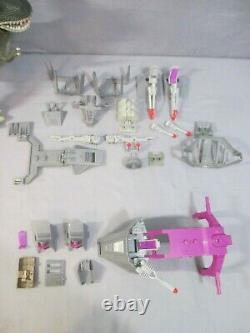 The electronics still work and he walks when you flip the switch. I just added 2 guns shown in the second to last picture that were no show in the first pictures. Note: This is coming from a smoke free environment.

Paint: This has playwear, broken and repaired tail. The tip broke off and was super glued back on. The battery cover does not stay on well so someone taped it on and it took some of the paint off.

Also one of the tabs broke on one of the side pannels. Someone tried to use tape to hold it on and it left tape gunk on the part. It may be tough to clean off. The figures have a little paint loss as well. Accessories: Incomplete and has broken parts.

All the parts on the bottom of the last picture are broken and some of the ones above those have stress marks. This is also missing 1 one of the large guns for the back (The one shown is glued on and does not move), missing the original rubber bands.

And the duel gun with the round base has the mount missing (It has a homemade peg to mount it rather than the original one). The battery cover switch is broke and the piece is hanging on. Also 2 of the pegs are broke of the purple unit that hold the large guns.

The large gray part attached to the purple part also has stress cracks in it. Overall condition: This has a lot of damage but aside from the broken parts, in my opinion this toy is in C8 condition. The figures are about C8.5 overall.

Please zoom in so you can see better. I do not grade loose figures C-10. Mint figure that is out of the package, but has no flaws. The figure may have been recently removed from the package.

Near Mint to Mint figure that may have the slightest flaw such as an extra dot of paint or a tiny dot of paint missing. Near mint figure that may have some small spots of paint wear. Excellent to Near Mint figure with more paint wear and signs of age i. Rusty screws, cracked elbows (on GI Joe figures), etc. Still an excellent looking figure, but was probably played with and may have more paint loss as a result. Nice looking figure that may have some playwear on the usual places (hands, feet, or head). Also might have some dirt or fading/darkening of the figure. Has some playwear, and some noticeable flaws, but still looks like a nice figure. More extensive paint wear on spots, and maybe some overall wear. Because we will not answer it. We rarely send counter offers so if you really want the item we suggest you make your actual best offer and leave it at that.

There are no exceptions to this rule so please do not ask. Please keep in mind that grading is a matter of opinion and not an exact science.

As you can see from my feedback the vast majority of buyers are happy with my grading. I strive to be as accurate as possible but I have found you can't please everyone and some people are just plain unreasonable.

This means all paper work, packaging and stickers are considered something separate since they are neither a weapon or accessory. Also, if multiple figures/items were packaged together, I only consider the parts that go to the specific item when judging completeness. For example any GI Joe vehicle and figure are considered two different items even though they were packaged together. Also, if an item came with a BAF (Build A Figure) part it also would not be considered part of that figure since it is used to build a separate figure. All of the major websites and identification books break down the toys this way and so do I.

It is never my intent to "rip" anyone off. But if you don't make me aware of the problem I can't fix it. I try to answer emails as quickly as possible but sometimes I'm just not around. So I will get back to you as soon as possible and I appreciate your patience. Remember, collecting should be fun. The item "Dino Riders TYRANNOSAURUS REX with 3 Figures T-REX 1988 Vintage Macau" is in sale since Tuesday, August 17, 2021. This item is in the category "Toys & Hobbies\Action Figures & Accessories\Action Figures". The seller is "stenbros-toys" and is located in Kirkland, Washington. This item can be shipped to United States, Canada, United Kingdom, Denmark, Finland, Australia, Portugal, Japan, China, Sweden, South Korea, Belgium, France, Hong Kong, Ireland, Netherlands, Poland, Germany, Austria, New Zealand, Philippines, Singapore, Switzerland, Norway, United arab emirates, Malaysia, Bermuda, Iceland, Monaco.